What is the unavoidable error (SRO: Short Range Ordering) of a K thermometer?

What is the unavoidable error (SRO: Short Range Ordering) of a K thermometer? If a type K thermocouple is inspected/calibrated for temperature after being used for some time at from around 250 to 550℃, a large error to the positive side may be generated. What are the cause and countermeasures?

■ Cause
Generally, the phenomenon occurs when the Seebeck coefficient reversibly changes due to SRO (Short Range Ordering) of the crystal structure. The part exposed to the temperature becomes heterogeneous due to an increase in the Seebeck coefficient because the arrangement of Ni and Cr, which are the elements of the type K thermocouple, becomes sequent at from 250℃ to 550℃. Providing a temperature gradient for the thermocouple by varying the insertion length to the heterogeneous part increases the thermo-electromotive force.
The increased amount of the thermos-electromotive force greatly depends on the temperature and time, causing the largest impact at the range of 350 to 450℃, and relatively large errors may be generated for a short period of time; for example, 0.9℃ for five min. for 350℃, 1.9℃ for 45 min., 3.7℃ for 7 hours, and 5℃ for 30 days. It is said that the ruled array of Cr is dominant; however, as for this phenomenon, heating at more than approx. 650℃ deletes the regularity, and the original status returns. The change in the temperature and the Seebeck coefficient is shown in the figure below. 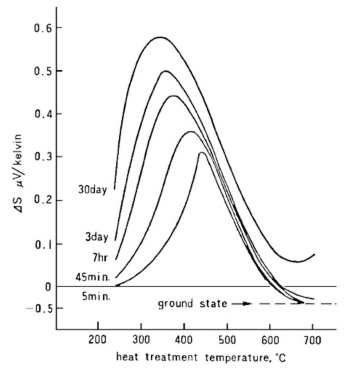 ■ Notes on Heat Treatment
The heat treatment is provided to alleviate SRO; however, attention needs to be paid since the sheathed thermocouple may be damaged due to the tempertature of the heat treatment and the materials of the thermocouple.
When austenitic stainless steel is heated in the range of 500 to 850℃ and cooled down, carbon (C) is extracted into the particle boundary organization, and chrome (Cr) is taken into the organization, resulting in the creation of chromium carbide, which easily causes particle boundary to be corroded. This treatment is called sensitization, which proceeds relatively quickly into a corrosive environment, and metals become fragile and easily damaged. Therefore, it is appropriate to select low carbon steel (SUS316L), stabilized austenitic stainless steel (SUS347 and SUS321), etc. for metal sheaths, which require heat treatment to prevent SRO.

This site uses cookies in order to monitor how it is of use to you and also to improve our service.
Please confirm that you agree to use of cookies by clicking "I Accept".
To find out more about the cookies we use and how to delete and block them, please see our "Privacy Policy".